Thank you for your continued support of our students, staff, and school community. We are excited to share some information with you about a recently approved opportunity for our district to temporarily expand and enhance our supply of available substitute teachers.

Due to the recent and unprecedented shortage of substitute teachers available to schools across Kansas, our Kansas State Board of Education recently approved an opportunity for individuals to temporarily qualify for an emergency substitute license from now through December 31, 2022.

An individual may temporarily qualify for an emergency substitute license with the following criteria:

Please know that our goals in considering and utilizing this temporary opportunity as a district will continue to prioritize student and educator safety and continuing to do everything we possibly can to not disrupt continuous student learning. We are confident that this opportunity and process will help us and benefit students, and we are excited to work with more people who are interested in serving in this role.

If you have any questions or if you are interested in knowing more about how to serve as a substitute teacher through this Emergency Substitute License opportunity, please contact Janel Anderson directly at janderson@troyusd.org or 785-985-3950.

Thank you for your time,

Dear USD 429 Students, Parents, Guardians, and Patrons.  Please take time to fill out this survey for us.  I will be sharing the information you provide us with the board of education in July.  I hope you are all enjoying your summer!  Thanks.

Three players from the THS Baseball Team received Honorable Mention Sports in Kansas All State.  Those receiving the honor were Juniors - Reagan Hartman and Austin Grable and Senior Gavin Fuemmeler.  Congratulations to all!

USD 429 Troy will be offering online enrollment with payment starting July 6, 2022.  The online link and forms will be available on our school website beginning July 6th.  Patrons may enroll online and pay enrollment fees.  If you enroll online and make payment, you will NOT need to attend in person enrollment.  The school district will offer in person enrollment by contacting the school offices after August 8th.  More information and the online link will be posted starting July 6th.

As a reminder, USDA will not longer be offering FREE meals for the 2022-2023 school year.  There will be an online link to fill out a Free/Reduced Meal Application.  Please make sure if you do not qualify for free/reduced that you also make a payment into their lunch account which can also be done online through your parent portal. 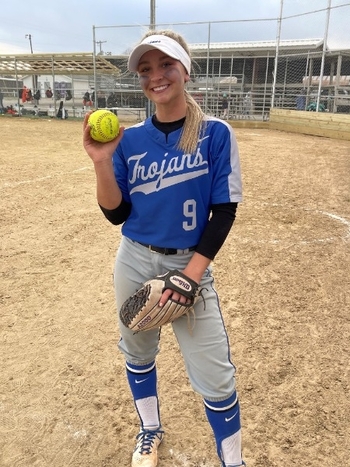 To be eligible for participation in interscholastic athletics/spirit groups, a student in upcoming grades 7-12 must have on file with the school district a signed physical form  & KSHSAA Parent/Student Sign off before the first day of spring practices on August 15, 2022. The annual history and the physical examination shall not be taken earlier than May 1 preceding the school year for which it is applicable.  Physical forms are also available at the Troy Central Office (Mon. - Thurs. - 8 a.m. - 3 p.m.).

2022 Class 2-1A All State Softball Selections

Congratulations Ladies! You make us PROUD!!

The Lady Trojan Softball Team made Trojan History this past week when they placed 2nd at the 2-1A State Softball Tournament.  The Ladies finish their magical season 23-1.  The Trojan Softball team placing the highest in State that any girls team in any sport has for the Trojans.

The Lady Trojans would face a tough Mission Valley team that put them out the previous season during Regionals to keep them from a state appearance last season.  The Trojans fell behind early and couldn’t come back in the 6-4 loss to Mission Valley on Friday, May 27th.  Mission Valley took the lead on a passed ball in the second inning.  The ladies lost despite out-hitting the Vikings ten to six.

Troy put up three runs in the fifth inning.  The Trojans offense in that inning were led by Reagen Hill, Avery Euler, and Emerson Weber, all driving in runs in the inning.

Paityn Engemann would get her first loss of the season.  The pitcher up for 2-1A Player of the Year would allow six hits and six runs over seven innings, striking out seven while Mission Valley pitcher only struck out 5.  Engemann would also tally a home run in the championship game in the fourth inning.

The Trojans tallied ten hits. Weber, Euler, and Engemann all managed multiple hits for the Trojans.  Engemann, Euler and Weber all had two.

The Lady Trojans would defeat Richmond-Central Heights 3-2 earlier in the day to go to their first ever girls State Championship Game.  The Trojans would win that game with a walk-off double.  The game was tied at two with the Trojans batting in the bottom of the eighth inning when Senior Paige Hinds doubled on a 1-1 count, scoring Reagan Hill.

The pitching was strong.  Paityn Engemann struck out nine.  Engemann earned the victory in the circle.  She went eight innings, allowing only two runs on four hits, and only one walk.

Hinds led the Trojans with two hits and four at bats.

On Thursday, May 26th the Trojans, the number #2 seed, would win 7-0 over Belle Plaine the #7 seed.  Paityn Engemann had an amazing day allowing zero runs in seven innings, allowing only two hits, zero walks, and striking out fourteen batters.